CLASSEGAMES is a new and unique kind of game studio. Other than the owner, Paul McCarl, we don't have any employees. Instead, our games are made by groups of like-minded programmers and artists who share the risk and share any profits. It is a great way for new game developers to get some experience and build a portfolio, all while becoming part owner of a commercial product!

The agreement we use to work together is simple. For each game there is a primary developer, partner developers, and apprentice developers. Each of these roles is different, so we should probably define each role.

The primary developer is the owner of the game. The primary concept and design of the product is their creation, and they foot the bill for assets needed during production, publishing costs, and promotional expenses. Typically the primary developer will create a majority of the product themselves, and they have the ultimate say in what parts they are willing to outsource to partner developers. They will be the financial entity to recieve the income from any sales, and they will be responsible for paying royalties to all partner developers monthly and to apprentice developers quarterly. As the publisher of the game, the financial risk and any liability lies with them alone.

Partner developers are individuals with the skill and expertise to contribute in a significant way to the development of the product. The primary developer will contract with them for the creation of some portion of the game. Both parties will agree to a timeline for the creation of that portion and a value in ownership percentage that will be earned upon completion. Partner developers are responsible for maintaining the portion of the game they contracted to complete for the life cycle of the game. If they are unable to complete it in the time alloted, the primary developer can cancel the contract or grant a time extension at their discretion. If the contract is cancelled, the hours invested by the partner developer will be entered as apprentice hours and will earn a share of revenue with the other apprentice developers. Partner developers do not contribute financially to the costs of development, but as a partner they are responsible for paying $10 per month during their involvement with the game to cover the costs of their inclusion in Unity collaborative and storage services. If they are finished with their portion, they can drop this fee when they are inactive and restart it only when necessary.

For instance, lets say that Partner Developer A completed the track editor for a racing game under a contract valued at 10% ownership and Partner Developer B completed the network multiplayer engine for the same racing game under a contract valued at 25% ownership. In a particular month, the net profits generated from the game amounted to $1,000. Partner Developer A would recieve $100 that month, and Partner Developer B would recieve $250 that month. If the monthly revenue was ten times larger, then the revenue paid to these partners would also increase ten-fold; however, if the revenue was only $10, then their payouts would be only $1 and $2.50. (It is important to remember that many really awesome indie games have been commercial flops!)

An apprentice developer is an individual who wants to learn how to make video games, but may not be ready to take on creating an entire sub-system of the game by themselves. Apprentices will be given opportunities to work in various ways to assist the primary and partner developers. Apprentices will keep track of the time spent on the project and will earn a share of the revenue based on the hours they and other apprentices put in during the development cycle. As part of this cooperative development method, 10% of the profits from the product are set aside for the apprentice developers who work on the game. Because each apprentice may have varying skills and abilities, the time they spent working on the game will be the measure of their contribution. An apprentice developer's revenue share will be determined by the hours they put into the project versus the total hours put in by all apprentice developers involved. Apprentice developers are responsible for paying $10 per month during their involvement with the game to cover the costs of their inclusion in Unity collaborative and storage services. If they are finished with their portion, they can drop this fee when they are inactive and restart it only when necessary. Additionally, if they enroll in one of our evening tutoring sessions for $30 per month, their tutoring fee covers access to work on any project as an apprentice developer. (See our Apprentice page for more details.)

We are currently working on the following projects:

A whole new twist on the match three genre that combines falling patterns of gems that you must fit into an ever shinking treasure chest! Releasing on Oculus for Rift and Go in August 2019. A Steam release for both VR headsets and standard PC's will be released Fall 2019. Mobile versions targeted for Christmas 2019.

You always claimed you would survive the zombie apocalypse. Now it has happened! Time to stop talking trash and start throwing some! Releasing Fall 2019 for Oculus Rift, Quest, and Go.

Your long forgotten temple has become the newest hangout for base jumping daredevils. Can you use the winds you control to keep these crazy adrenaline junkies safe? If not, you will end up all alone again! Releasing Fall 2019 for Oculus Rift, Quest, and Go. 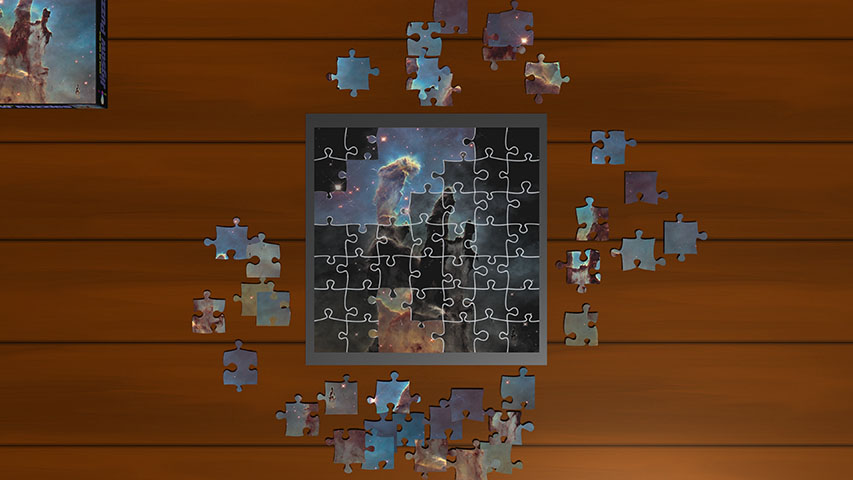 Best of the Net Jigsaw

This awesome jigsaw features some of the best images from around the Internet.

All she wants is gold, and she is willing to take any risk to get it. Well... She is willing to pay YOU to take the risks! It is just another day, another dollar for the poor, unemployed dungeon crawlers of the world!

Serious poker has gone to the dogs. A multiplayer, social VR experience for Oculus Go, Oculus Rift, and Oculus Quest.

Doctor CureAll vs. the Zombie Apocalypse

It's humans versus zombies in this tile flipping strategy game. A multiplayer, social VR experience for Oculus Go, Oculus Rift, and Oculus Quest. 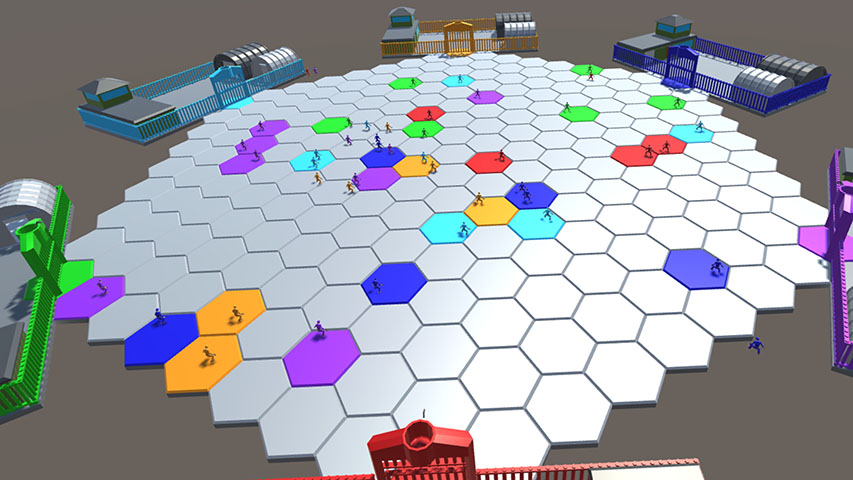 Defend your base against the onslaughts launched by five other competing players. Deploy infantry and tanks to attack your opponents and use engineers to build towers to defend them as they sally forth. The twist is that your towers only fire when you take one over in first person mode. A multiplayer, social VR experience for Oculus Go, Oculus Rift, and Oculus Quest.

This fast-paced, arcade racer is a modern take on a retro sensation. We have taken inspiration from the racing games we loved in the past, mixed it together with online competition for up to 16 players, and best of all made it free to play for everyone! And the track designer lets you create tracks to share online to increase your reputation and earn you more in-game currency to spend.

This is the ultimate baby doll simulator for your phone, tablet, or computer! It was designed by the foremost expert on playing with baby dolls, my daughter. Turn your phone into a digital daycare center and build a thriving business while having loads of fun! Includes a full avatar system with both male and female options, dozens of babies to collect, puppies, kittens, toys, and more!

You are one of Santa's elves checking out who's been naughty and nice around town, but you fell asleep and missed your ride home. Now your only hope is to make it to the mall and catch a ride home with Old Saint Nick. To make things worse you are almost out of christmas magic and can't turn invisible. That's ok, nobody will notice an elf hiding in an ugly christmas sweater! 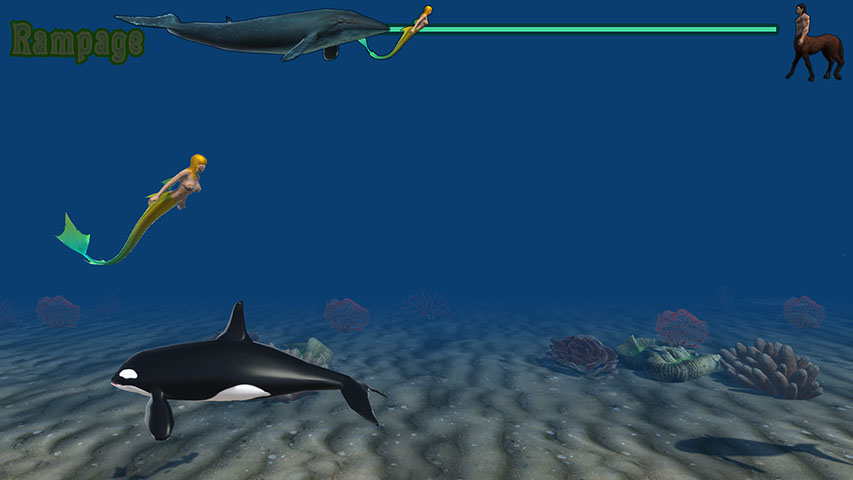 So you fell in love with a centaur... What daddy doesn't know won't hurt him, right? Turns out your father, Posiedon, knows all about it, and now every fish in the sea is out to stop you from being with your one true love. Escape the whale, go on a fish slapping rampage, and find the potion that will make you a centaur, too! True love cannot be stopped!

Search the city for lost kittens and return them to their loving owners who miss them, all while avoiding the evil dog catcher! 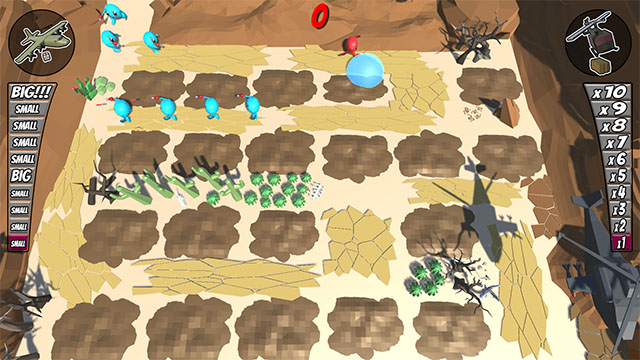 Tower Defense... Easy! Tower Defense combined with a rhythm sequence game... Challenging! Another game inspired by one of our previous Ludum Dare games.

It is you against the mountain in a race for the world record time! Ski For Glory features courses from "ski bunny"-safe hills to triple black diamond death traps! It even has a slope designer that allows you to create your own ski resorts and host competitions to earn in-game Ski Bucks. It is free to play, so the only question is do you have what it takes to be the world's greatest skier?

Which animal says "Moo?" Nope, the chicken says "Cluck, cluck!" Learn you farm animals in a fun phone app meant to keep your little ones happy! My daughter Annie loved it, maybe your kids will love it, too!

Can you enter the volcano and escape with the gold? Probably not!

Learn about the Latter-Day prophets in this entertaining trivia challenge featuring events from their lives and teachings they were known for.

This is our first AAA title! The design has been refined for nearly twenty years and now the technology has reached a point where this genre defining game can be made. We are targeting a release date in 2022. This one is super secret. Sh-h-h! Don't tell anyone!

And a whole lot more are in the works...

If you would like more information about working with us to make great games, please fill out our Google form by clicking the sign up button below.